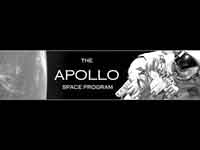 This is a multimedia example designed for a college module called Communication Models. Built in Flash, the final movie runs as a full screen SWF file intended for a 1024 x 768 screen resolution. Photoshop was used to manipulate and build the images.

The finished article contains mouse over animation, audio and sound effects, picture fades between every screen and a menu default navigation.

Due to the nature of the product it is not suitable for viewing online, however there are some screen shots to give a general idea of the approach taken during the design process.

This product is designed to be viewed full screen (Ctrl + f) on a monitor displaying a 1024 X 768 resolution. It requires multimedia speakers capable of playing music coherently, this is vital as the sound plays an important role in forming syntagmatic relationships between the various media.

This piece is derived from an interest in the imagery and sound of the Apollo space program in the late 1960s – Early 1970s.

There are technological factors, the incredible obstacles that were over come at a time when computing technology was in its infancy and mankind was literally chartering unknown territory for the first time in centuries.

Then there are the romantic elements, the bravery, improvisation, camaraderie and escapism into a surreal environment. While today’s space exploration is as fascinating, and probably more productive, the sheer audacious and breath taking nature of the Apollo program is still an inspiration to all mankind.

As a signifier the product manifests itself as an educational and informative display, designed to be used by viewers of all ages and intellectual ability.

It signifies a tribute to mankind’s exploration, and a general nostalgic insight into the era as a whole. The product works from the outset with a high level of modality with respect to reality and the factual basis in which all the information is presented. Preconceived from the start, it works on a formulated structure that has been edited to provide seamless interaction in a sequential manner.

Although the product is of a faithful nature, the subject matter has strong mythological ties to cultures throughout the world. Its notoriety forms the main part of the era’s genre and its connotations ripple outwards into areas of hippy style belief and understanding.

Elvis Presley is working in the local Co-Op. With this in mind some behavioural elements of social codes can be noted. The English language, or human speech in general, is a common everyday activity that is taken for granted the world over. The sound of interaction taking place between Earth and another celestial body somehow takes on a whole new meaning. Armstrong narrates, “I’m at the foot of the ladder” After managing space travel, orbit and lunar landing he still has to clamber down a ladder to reach the objective, much like anyone would whilst retrieving a tennis ball from a gutter. Along with basic manners, these common earth like activities give the whole process an almost comical effect and add to the feeling of mutual admiration.

In a textual context the codes are slightly more obvious, aesthetically the use of texts are reminicant of that era. The title fonts, the rounded TV screens with wooden surround and intermittent white noise all point a period in time. The main body of information is presented in a ‘Green Screen’ style complete with flashing cursor and digitised font, again representative of that computing age. The image of the moon is seen through a style of window, this is important because syntagmatically both planets can be seen whilst listening to radio communications between the two.

The music that forms the backing in the sound hierarchy is also of relevance to the product as a whole. Once described by a friend as music for Bank Managers and Hippies, ‘Great Gig In The Sky’ is derived from arguably one of the greatest records of all time. ‘Dark Side Of The Moon’ offers an obvious connection, not just by its name but also by the interpretation of its sound and era of release. One trait that Bank Managers and Hippies do share is their lack of grip on reality, perfect in this context to tie in with the theme of space exploration.

The interaction between the comforting radio comms and the backing music should also be noted as a form of bricolage. From the beginning the radio can be heard over a black screen with credits, reminicant of a film style of approach that would be expected from a country prone to romanticising its achievements.

Some interpretative ideological codes can also be highlighted. For the first time in its history pictures of planet earth were available to it inhabitants. This started to bring about changes in thinking, at a time when the US military campaign in Indo-China had began to falter, peace movements started to grow as people started to appreciate how small the earth was.

The product does not make any assumptions towards the user having to understand other texts for its comprehension.