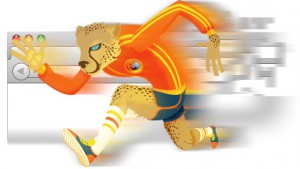 Amid much fanfare Firefox 4 was released today. I watched and listened to the event live on the web, and heard the download count increase in its hundreds of thousands to whooping and applause. It sounds boring, a load of geeks sat around talking about their latest browser and how the various plugin will or wont work. But for some reason it made for compelling viewing. Programmers talking about rebuilding the JavaScript engine, marketing people talking about the release schedule and developers talking about the new website, I sort of wished I was there – glugging coffee and twittering continuously on a silver Mac.

The browser itself is awesome. The first thing to notice is the blisteringly fast page rendering speed, almost certainly down to the work the programmers and developers put into the JavaScript engine, the same thing that Google did about 18 months ago when they released their browser. I’ve only being playing around for a couple of hours so have yet to fully grasp the capabilities of this release.

The upgrade was smooth, reinstalling the latest and most compatible version of Fire Bug and even reopening the tabs that where open on the old version. The little things.

So where next? Pretty much all the real estate that is possible to be displayed on the screen is now given over to content and it’s difficult to see a point in the future when connection speed will come close to matching page render. But does it matter?

Right now it’s just great to indulge in something so slick and usable. It’s been an emotional day.