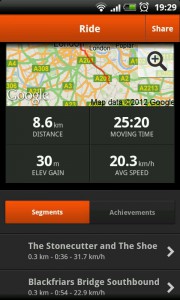 Basically it tracks your journey and allows you to compare your results with other app users that may have completed the same route. It goes further still and identifies segments of that route and places your time as an achievement on a leader board.

It’s aimed at runners and cyclists but it’ll work for any journey where a GPS Signal can be received, skiing and rowing for example. There’s all sorts of statistics available, including elevation gain and average speed as well as all the usual media sharing options too.

It was recommended to me by a colleague at work whilst unlocking my bike in the cycle store at work, which reeks pleasantly of rubber and sweat. Like most apps I downloaded it without really expecting much and kicked off by starting a new journey as I set off on my home commute.

Arriving home and completing the journey in the app I was amazed at the segmentation and achievements. On the Great Dover Street Segment which runs from Borough Station to The bricklayers Arms I managed to rank 50 out of 60, not great but it’s a start. That said I did manage 6 out of 25 on The Stonecutter and The Shoe Sprint.

A fantastic app, great looking and inclusive. More importantly it has longevity in that the app users are by nature likely to be competitive and regular. Great stuff.