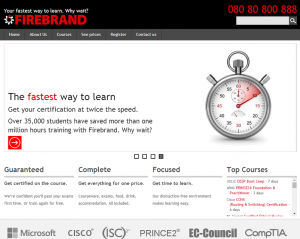 I started working at Firebrand Training in 2007 when the company was still called Training Camp. Taking over from an outgoing developer, I had to endure two mammoth interviews before starting work in their central London office.

A blog post can’t really do my 5 years at Firebrand Training much justice, other than to say that the scope of the work was massive, and the company itself was, and still is a fantastic place to work.

On my first day I inherited a several thousand page flat file website and a copy of Dreamweaver, whilst this is a nightmare scenario for any web developer it did at least give us a blank canvas on which to build a new web presence from scratch.

We started by moving the entire site contents into a CMS, this involved the laborious task of stripping the bad inline style tags from the HTML, there where thousands of pages.

Once complete we were left with an ASP CMS Served on IIS With a SQL Server back end.

After re branding from Training Camp to Firebrand Training the application was continuously improved and tuned for maximum performance both in terms of conversion and load speed.

It was decided from the outset that this process would never finish and would always continue to evolve, leaving us with an open ended project where we’d try things out before moving forward only if the results were conclusive. This meant that we wouldn’t spend too much time making changes if the results couldn’t be guaranteed and from a selfish point of view it also meant that I got to work with tons of different front and back end technologies.

Firebrand Training is a great place to work, ideas are actively encouraged and there’s a myriad of different projects and technologies to get involved with.