ThinkPads are for Space, not Starbucks.

I love my ThinkPads, always have done.

The sleek, black, hard matte rubber exterior is a design classic and has the strange futuristic feel of quality and purpose. Open the lid and the attention to detail, ergonomics and technology scream ‘Tech!’. 80s space station style tech, the sort that wouldn’t be out of place on board the Millennium Falcon, Solo whacking in some new co-ordinates whilst trading insults with Leia.

I inherited my first ThinkPad from Firebrand Training, a lovely looking T43p. This was at the time that IBM was still making them before they sold the entire ThinkPad business to Lenovo. From the outset I was taken with its square businesslike design, functional layout and rock solid build quality. Everything about it felt and looked not only good, but proper and fit for purpose.

When I say ‘businesslike’, I don’t mean the fictional business of white men in suits and briefcases shaking hands in a ‘Central Business District’ glass reception, I mean ready to spin up, work hard and create some cool stuff.

The OS I inherited was a later version Windows XP which had slowed to the point of no return, I remember thinking at the time that this was no operating system for such a great looking piece of hardware. I experimented with various Linux distributions until I settled on Linux Mint using the Cinnamon desktop environment, the results are awesome. For a laptop that’s nearly 10 years old with only 2GB of RAM it still has blazing performance, if it where an actor it would probably be Sandra Bullock. 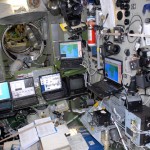 ThinkPads on the IIS.

They use a model that looks very much like the T43p on the International Space Station, and in this scenario looking very much like is as good as! The largest artificial body in Low Earth Orbit, so what if the hardware of choice doesn’t have a stupid glowing icon or looks out of place at the local coffee shop.

Whilst I love working in a Linux environment with all the power afforded by the shell, realistically I still need a Windows machine to get by. Enter the T520i which I’ve now had for a few years. It’s a completely different beast to the T43p with a slightly more refined feel and now built buy the Chinese manufacturer Lenovo. It is however a another classic example of function over form, engineering as design, quality rather than show.